B O N U S
GET STARTED

B O N U S
GET STARTED

Can CENTUS go down due to constant increase of new CENTUS supply for its holders through the seigniorage?

We believe that the distribution of CENTUS among existing CENTUS holders is the fundamental basis for the stability of the entire system. Moreover, we are sure that this speculative component gives stability to our “Stable Cent”.

When a seigniorage (dividend) is distributed between the holders of CENTUS, the coin gets 2 sources of value: A stable coin CENTUS itself and a seigniorage, which is paid to people twice a week. The stable coin CENTUS is pegged to 1 US CENT (￠). Since CENTUS owners regularly receive seigniorage, the cost of CENTUS is 1￠+ seigniorage. This means that as long as people expect upcoming coin accruals, they will ignore the basic 1 cent peg and be ready to buy CENTUS at prices more than 1 US CENT.

In fact, if market participants expect that there will be a seignorage distribution in the near future and new CENTUS will be distributed among their owners, they hardly would be motivated to sell their CENTUS at a price less than 1￠ + expected seignorage.

We estimate that this dynamics will not lead to high volatility of the CENTUS price, as quite a large amount of coins will be distributed on the market through their recipients. This will stabilize the price of CENTUS by putting predictable pressure on it.

In the case above, we believe that if market participants would expect new payments to CENTUS owners in the near future, they would buy CENTUS for speculative reasons. The CENTUS algorithm will respond to this increased demand through minting new CENTUS in order to recover price of the coin to 1 US CENT.

And although this may encourage speculators to buy CENTUS even more in order to receive these new coins, and cause long periods of artificially increasing and keeping prices at the level above 1 cent, the algorithm decreasing a rate of the seigniorage when a price of CENTUS increases will stabilize CENTUS at a level about 1 US CENT.

It is natural to assume that the distribution of new coins among the existing CENTUS owners will only increase the value of CENTUS, as this creates an attractive speculative component that rewards people for adopting CENTUS.

We believe that the addition of this speculative component will stimulate constant demand, and a seignorage with floating interest will only increase the usefulness of CENTUS, without jeopardizing its stable value.

According to our forecasts, this will significantly increase the real and long-term value of CENTUS for market participants.

We intentionally set such a high seigniorage level for CENTUS, because, according to some calculations, there should be 3–4 times more small coins in the economy than paper money. Just like in real life, the bulk of small coins In the CENTUS economy is usually not used in circulation, but accumulated in wallets, piggy banks, pods as a change. The principal difference between it and metal coins is that you never will lose your change, your CENTUS will always remain with you.

CENTUS is not “minted” for future use: Each unit is created at the time of purchase and is destroyed in the case of reverse exchange. Thus, the bulk of CENTUS will be secured by assets that will fall into the reserve.

The primary purpose of CENTUS is to serve as a means of accumulating and generating income for ordinary people, holders of it, as well as a means of settling between thouse people, and not for speculations by traders.

We do not seek external financing from outside investors, for the reason that they will require high returns in exchange for early investments later. We sincerely believe that these high incomes can be directly sent to people who buy CENTUS without these first intermediaries.

The CENTUS affiliate program implies that the coins will be owned by any people in the world, not just those who have the means to purchase them. At the same time, we achieve the network effect, which is so important in the blockchain economy.

We like “Libra” — an ambitious project, promoted by the social network Facebook accompanied by global technology leaders. But with all advantages like a stable currency and a global nature, this project provides for partnership only with the largest companies which potentially will receive a huge seigniorage from the currency issue in the future.

However, not every ordinary person can become a holder of Libra, because if you don’t have enough money to buy cryptocurrency, you actually can’t use it, no matter how global it is.

On the contrary, CENTUS with its affiliate program aimed at broad masses of ordinary people will allow anyone in the world to hold stable coins and receive an income not only from affiliate program, but also from seigniorage, although previously seigniorage was a prerogative of states, central and commercial banks. 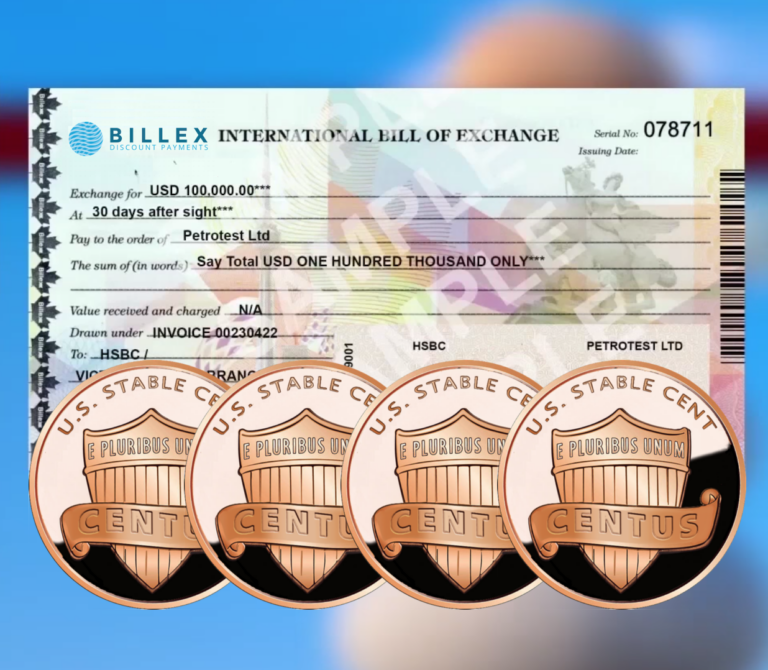 What happens if the CENTUS price goes beyondthe reasonable volatility?

In order to contract CENTUS supply and recover the price of CENTUS to the level of peg (1 US CENT), we must properly incentivize holders of CENTUS to lock up their CENTUS in exchange for future payoff. We do this when you issue BILLEX tokens (Discount Bill of Exchange) through a smart contract in exchange for locking your CENTUS.
BILLEX tokens are issued on open auction for prices that are generally less than 1 CENTUS. In return, they promise a future payout of 1 CENTUS when the system is expanding and when there are no older outstanding BILLEX.

First, we discuss the open auction system. In order to issue BILLEX, the smart-contract runs a continuous auction in which bidders specify a bid and bid size for new BILLEX tokens. In other words, auction participants specify how much CENTUS they want to lock for each BILLEX and how many BILLEX tokens they want to issue at that price. For example, one can specify that they would like to issue 100 BILLEX for 0.9 CENTUS per BILLEX.

When the smart-contract decides to contract coin supply, it chooses the orders with the highest bids and converts the holders’ coins into BILLEX until sufficient CENTUS has been destroyed.

The protocol currently sets an artificial limit for the price of BILLEX tokens at 0.10 CENTUS per BILLEX.

The payout of BILLEX works as follows.

First, the smart contract counts BILLEX tokens in circulation and orders them according to when they were created, with the oldest first. This forms an ordered sequence of BILLEX, the so-called BILLEX Queue. The smart contract also counts all locked CENTUS tokens. Then, the smart contract mints N new CENTUS and distributes them as follows:

BILLEX maturity payouts are processed on a first-in-first-out (FIFO). The smart contract begins converting BILLEX into CENTUS according to their order in the BILLEX Queue, one-for-one. For example, if we need to mint 100 CENTUS, we convert the 100 oldest outstanding BILLEX into 100 new CENTUS coins. The FIFO queue incentivizes people to buy BILLEX and lock their CENTUS earlier rather than later, since BILLEX created earlier are paid out before BILLEX created later.

U.S residents can not receive
seigniorage in CENTUS tokens.

Any cookies that may not be particularly necessary for the website to function and is used specifically to collect user personal data via analytics, ads, other embedded contents are termed as non-necessary cookies. It is mandatory to procure user consent prior to running these cookies on your website.